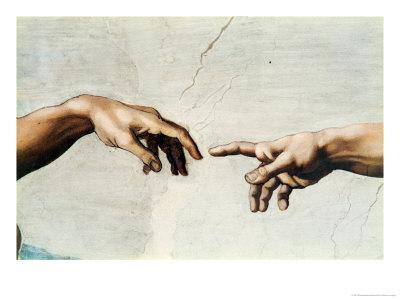 He was placed, as God's representative, over the lower orders of being. They cannot understand or acknowledge the sovereignty of God, yet they were made capable of loving and serving man. Man was to bear God's image, both in outward resemblance and in character. His nature was in harmony with the will of God. His mind was capable of comprehending divine things. His affections were pure; his appetites and passions were under the control of reason.

He was holy and happy in bearing the image of God and in perfect obedience to His will. As man came forth from the hand of his Creator, he was of lofty stature and perfect symmetry. His countenance bore the ruddy tint of health and glowed with the light of life and joy. Adam's height was much greater than that of men who now inhabit the earth.

Eve was somewhat less in stature; yet her form was noble, and full of beauty. The sinless pair wore no artificial garments; they were clothed with a covering of light and glory, such as the angels wear. So long as they lived in obedience to God, this robe of light continued to enshroud them. Without companionship the beautiful scenes and delightful employments of Eden would have failed to yield perfect happiness. Even communion with angels could not have satisfied his desire for sympathy and companionship.

There was none of the same nature to love and to be loved. God Himself gave Adam a companion. Eve was created from a rib taken from the side of Adam, signifying that she was not to control him as the head, nor to be trampled under his feet as an inferior, but to stand by his side as an equal, to be loved and protected by him.

A part of man, bone of his bone, and flesh of his flesh, she was his second self, showing the close union and the affectionate attachment that should exist in this relation. God celebrated the first marriage. Thus the institution has for its originator the Creator of the universe. When the divine principles are recognized and obeyed in this relation, marriage is a blessing; it guards the purity and happiness of the race, it provides for man's social needs, it elevates the physical, the intellectual, and the moral nature.

In this garden were trees of every variety, many of them laden with fragrant and delicious fruit. There were lovely vines, growing upright, yet presenting a most graceful appearance, with their branches drooping under their load of tempting fruit of the richest and most varied hues. It was the work of Adam and Eve to train the branches of the vine to form bowers, thus making for themselves a dwelling from living trees covered with foliage and fruit.

There were fragrant flowers of every hue in rich profusion. In the midst of the garden stood the tree of life, surpassing in glory all other trees. Its fruit appeared like apples of gold and silver, and had the power to perpetuate life. The creation was now complete. Adam and Eve had free access to the tree of life. No taint of sin or shadow of death marred the fair creation. The great Jehovah had laid the foundations of the earth; He had dressed the whole world in the garb of beauty and had filled it with things useful to man; He had created all the wonders of the land and of the sea.

In six days the great work of creation had been accomplished. And God blessed the seventh day, and sanctified it: because that in it He had rested from all His work which God created and made. All was perfect, worthy of its divine Author, and He rested, not as one weary, but as well pleased with the fruits of His wisdom and goodness and the manifestations of His glory. After resting upon the seventh day, God sanctified it, or set it apart, as a day of rest for man.

Following the example of the Creator, man was to rest upon this sacred day, that as he should look upon the heavens and the earth, he might reflect upon God's great work of creation; and that as he should behold the evidences of God's wisdom and goodness, his heart might be filled with love and reverence for his Maker. In Eden, God set up the memorial of His work of creation, in placing His blessing upon the seventh day.

The Sabbath was committed to Adam, the father and representative of the whole human family. Its observance was to be an act of grateful acknowledgment, on the part of all who should dwell upon the earth, that God was their Creator and their rightful Sovereign; that they were the work of His hands and the subjects of His authority. Thus the institution was wholly commemorative, and given to all mankind. There was nothing in it shadowy or of restricted application to any people.


God saw that a Sabbath was essential for man, even in Paradise. He needed to lay aside his own interests and pursuits for one day of the seven, that he might more fully contemplate the works of God and meditate upon His power and goodness. He needed a Sabbath to remind him more vividly of God and to awaken gratitude because all that he enjoyed and possessed came from the beneficent hand of the Creator.

God designs that the Sabbath shall direct the minds of men to the contemplation of His created works.

Nature speaks to their senses, declaring that there is a living God, the Creator, the Supreme Ruler of all. Day unto day uttereth speech, and night unto night showeth knowledge. The beauty that clothes the earth is a token of God's love. We may behold it in the everlasting hills, in the lofty trees, in the opening buds and the delicate flowers. All speak to us of God. The Sabbath, ever pointing to Him who made them all, bids men open the great book of nature and trace therein the wisdom, the power, and the love of the Creator. Our first parents, though created innocent and holy, were not placed beyond the possibility of wrongdoing.

God made them free moral agents, capable of appreciating the wisdom and benevolence of His character and the justice of His requirements, and with full liberty to yield or to withhold obedience. They were to enjoy communion with God and with holy angels; but before they could be rendered eternally secure, their loyalty must be tested. At the very beginning of man's existence a check was placed upon the desire for self-indulgence, the fatal passion that lay at the foundation of Satan's fall. The tree of knowledge, which stood near the tree of life in the midst of the garden, was to be a test of the obedience, faith, and love of our parents.

While permitted to eat freely of every other tree, they were forbidden to taste of this, on pain of death. They were also to be exposed to the temptations of Satan; but if they endured the trial, they would finally be placed beyond his power, to enjoy perpetual favor with God. God placed man under law, as an indispensable condition of his very existence. He was a subject of the divine government, and there can be no government without law. God might have created man without the power to transgress His law; He might have withheld the hand of Adam from touching the forbidden fruit; but in that case man would have been, not a free moral agent, but a mere automaton.

Without freedom of choice, his obedience would not have been voluntary, but forced. There could have been no development of character. Such a course would have been contrary to God's plan in dealing with the inhabitants of other worlds. It would have been unworthy of man as an intelligent being, and would have sustained Satan's charge of God's arbitrary rule. I testify that the earth and all life upon it are of divine origin.

The Creation did not happen by chance.

It did not come ex nihilo out of nothing. And human minds and hands able to build buildings or create computers are not accidental. It is God who made us and not we ourselves. We are His people! We cannot disregard the divine in the Creation. This earth is but one of many creations over which God presides. Simply summarized, the earth was created that families might be. And as part of the planned destiny of the earth and its inhabitants, here our kindred dead are also to be redeemed. In our time, a whole, complete, and perfect union of all dispensations, keys, and powers is to be welded together.

Though our understanding of the Creation is limited, we know enough to appreciate its supernal significance. And that store of knowledge will be augmented in the future. Yes, further light and knowledge will come.

It will be returned to its paradisiacal state and be made new. There will be a new heaven and a new earth. Meanwhile, brothers and sisters, we should understand our significant responsibilities.

Both the creations of God and the creations of man teach us the importance of each component. Do you think that the absence of one piece of granite from the face of this building would be noticed? Of course it would! So it is with each son or daughter of God.