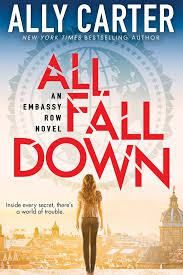 NOOK Book. Will her nemesis become her ally? Princess Sepora of Serubel and King Tarik of Theoria have formed an uneasy truce between their kingdoms since the deadly plague began to rip through Theoria. Since their feelings for each other are entangled in politics and power, they must use their own trusted resources to find common ground. But when traitors with powerful allies arise from unexpected places, Tarik and Sepora face challenges that will change both of their kingdoms forever. Praise for Ally : "Readers will be anxiously turning pages toward the end while they appreciate a few humorous moments along the way.

She lives in Crestview, on the Florida Panhandle, with her husband and their daughter. As I sweep back, I use the inside of my foot to kick dirt in his face for daring to come so close to me. These are, after all, only practice sessions, and if he's going to test me this way, I'm most certainly going to return the favor. He glides to his left, an effortless movement, avoiding not only the sand, but the cloud of dust left in its wake.

I'm left infuriated and thrilled all at once. I can't imagine there could be anyone faster than Sethos, Tarik's younger brother. I haven't seen many of the Master Majai train, as the king's highly skilled army of warriors spend their days at the Lyceum when not on duty, but of these Favored Ones I have watched from the balcony overlooking this courtyard, none are faster than Sethos, who only just turned sixteen. Even his shadow cannot keep up with his movements. I wonder whether his father, the Warrior King Knosi, was as nimble on his feet. Sethos laughs.

Listen to All Fall Down: Book 1 of Embassy Row by Ally Carter at stomadwrathhocong.gq

But I'm afraid you'll have to do better than that, Princess, if you're going to overtake me. And we both know these lessons are not strictly for my instruction. Our sessions together bring us both relief from the delusions we used to call lives. There was a time once when we were both free to make our own decisions, free to marry whom we chose — or, at least, the illusion of that choice — and free to leave the palace walls.

It is difficult to watch sometimes, the deterioration of the affection these brothers once had for each other. I shake my head, lowering my sword. Catching one's breath in the stifling Theorian heat seems almost as impossible as merely shaving Sethos with my sword. I want to graze him so badly, to at least nick him, anything to get that smug look wiped from his face. But other Majai cannot, and so when I get close, I know he is just toying with me.

He makes a tsk ing sound with his tongue. I've come to abhor that sound, so mocking and condescending. You know you could —" "Do not say it," I hiss, lifting my sword again.

I'm growing tired of this, the same conversation we have each session. He's bent on seeing me Forge, bent on teaching me to use my ability to protect myself.


He insists that if I could produce spectorium fast enough, I could use it to scald my opponent. I suppose he's right. But even if I wanted to Forge, I couldn't.

Not here in the open. I know it. Sethos knows it. Our two impervious kings, Tarik and my father, have decided that my Forging should be kept a secret from the kingdoms. That my power, as the only Forger of spectorium, puts me in danger. And that my well-being is of the utmost importance. Tarik's sense of duty makes my well-being his concern. But Father? His intentions strike the opposite direction entirely. Every day, he grows impatient of my "well-being," threatening to chain me in the dungeon the palace in Anyar, the heart of Theoria, has no such dungeon until I Forge spectorium for him.

He has thrown outrageous fits in our moments of privacy, demanding that I Forge, and when we are in the company of the Falcon King, he finds many diplomatic ways to suggest the same to Tarik. But for some reason, Tarik is not willing — not yet, at least — to force my hand. The Falcon King must think I will acquiesce, that I will give in and eventually supply him with the spectorium needed for the plague.

He is wrong. I will no longer supply any of the five kingdoms with spectorium. Not Theoria for its plague nor Tarik's leverage, not Serubel for its economy nor Father's ambitions. The ice kingdom of Hemut will have to make do without the element, as will Wachuk and Pelusia, which I'm thankful have shown no interest in it in the past. The age of spectorium has ended. I will no longer be used as a pawn in a game of power. And I will no longer trust anyone to decide what is and is not for my well-being. Which, sadly, must include Sethos. How am I to know whether Sethos is secretly siding with Tarik, planning to bring him the fresh spectorium I Forge during our training sessions?


Sethos, though one of my favorite people at the moment, is conniving and cunning enough to pull off such an act of betrayal. Perhaps that is why he constantly pesters me to Forge — Tarik has put him up to it. Though, the thought is truly unlikely. Sethos barely speaks to Tarik anymore, and while I'm not a Lingot as Tarik is, having the ability to discern the truth from a lie, I'm not a fool, either. It is plain that Sethos considers his older brother a tyrant — and the fact that Tarik has ordered him to wed the Princess Tulle of Hemut is irrefutable proof of that accusation.


It came down as a royal order, one that the entire kingdom of Theoria knows about and one that Sethos cannot forgive his brother. No, Sethos is not trying to betray me. Not for Tarik.

All Fall Down: Book 1 of Embassy Row

Truth told, our practices together are the only time Sethos resembles himself anymore. Something happens to him after we finish — after we are sapped of energy and of sweat, after we've returned to our lot in life. When he arrives for the evening meal in the palace — another one of Tarik's requirements — he is sullen and quiet and bereft of charm. He is no longer Sethos. I know that it is his imminent marriage to Tulle that has him so depleted of his usual charm and so filled to the brim with ill temper.

I cannot fault him there, for a marriage without love is what we are both facing, and the prospect of it makes most of my food lose its taste. But Sethos's circumstances are unique in that he actually despises his betrothed, whereas I have resolved to simply remain aloof. Any love Tarik and I once felt for each other has been twisted into something that resembles manners and diplomacy.

With Sethos, manners and diplomacy have never come easily. I watch the moment he closes himself off to me. However, D'Amico acknowledged being the inspiration of the Joe Tantori character in a podcast interview. Overstreet and the Tarboo Ridge Coalition, meanwhile, continue to be locked in litigation.

After Freeman heard from the Inlander that Tate and Overstreet were the same person, he said, the fact that D'Amico and Overstreet were working together deepened his concern. Asked about the prepping movement, Knezovich says that he applauds those who want to be prepared for potential disaster. On the other hand, he accuses Shea and his allies of actually trying to bring about disaster and collapse. Instead, he says, preppers just want to be prepared for the worst. In a blog post, Tate claims a law-enforcement friend told him that his Days book series was cited in a Homeland Security training as a group "fantasizing about the collapse of society.

On the other hand, in Days , Tate writes that the central character, Grant Matson, experiences the collapse with a rush of "warm joy. In another blog post, Tate stresses that it's good to get mad at the evil people who screwed up this country, but that violence should only be used in self-defense.

If you think Days is persuading you to go out and hurt people, then you do not understand the book. Yet at times his series revels in violence, including against prisoners. After the good guys capture a teenager who killed a member of their squad, a team member knifes the traitor to death.